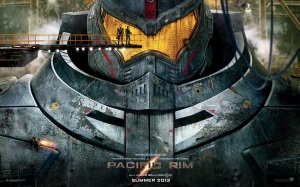 After footage of “Pacific Rim” played at CinemaCon this week, the whispers were palpable.

“This looks like a new ‘Transformers,’” many in the crowd of theater exhibitors could be overheard saying.

“I think that the reference of the mechanics — the robot design — is completely different than that universe,” he said, referring to “Transformers.” “But if [moviegoers] are talking about how big the franchise is, I welcome it. If anyone says there are any visual similarities, they are design blind.”

Del Toro was sitting in the basement of the Colosseum at Caesars Palace on Tuesday, shortly after a new trailer for his film was unveiled to conference-goers. 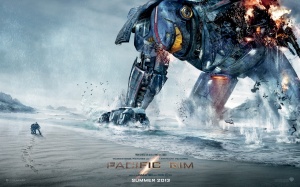 Because he had not directed a film since “Hellboy II: The Golden Army,” the filmmaker felt the need to “super prepare” for “Pacific Rim.” On most films, he said, he visits the set once before filming and creates one or two storyboards; for his latest directorial effort, he went to the set 25 times and prepared six storyboards.

Warner Bros. was so pleased with the director’s cut of the film that he was sent to work on a script for a sequel — though he doesn’t think a franchise will be officially greenlighted until the box office returns are in this summer.

No matter how the movie fares, though, Del Toro said the process of making “Pacific Rim” has left him forever changed.

“I could have an aneurysm, be booted out of town in August — whatever happens, I’ve already been blessed by doing ‘Pacific Rim,’” he said. “Creatively, it’s the greatest thing I have experienced, because it was a movie that was protected and secluded creatively with the scope of a big movie. And rarely, if ever, can these things combine.”