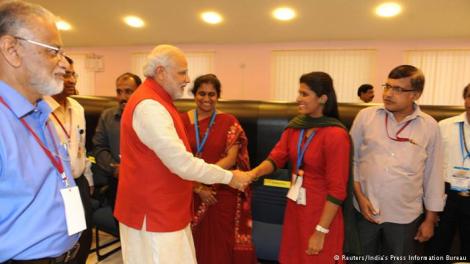 China on Wednesday congratulated India for its successful Mars mission saying that it was not only a proud achievement for the country and Asia but also a “landmark progress” in mankind’s exploration of outer space.

“We have seen the report and congratulate India on the Mars satellite entering the orbit successfully,” Chinese Foreign Ministry Spokesperson Hua Chunying told a media briefing here while replying to a question on the successful sojourn of India’s Mars Orbiter Mission (MOM) spacecraft ‘Mangalyaan’.

“This is pride of India and Pride of Asia and also is a landmark progress in humankind’s exploration of outer space. So we congratulate India on that,” she said.

Responding to a question on whether China sees any room to work with India on space exploration in future, she said, “China always maintained peaceful development of outer space and carry out cooperation in this regard.”

“We are willing to work with the world to peacefully develop and explore the outer space and make contribution to the sustainable development and long term peace of the outer space,” Hua said.

Mangalyaan provides a lead to India in this regard, though China which has an advanced space programme is in the process of constructing a space station which is expected to be ready by 2020.